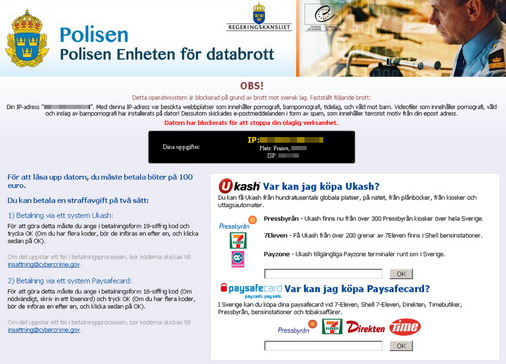 A couple of days ago I was summoned as “the computer guy” to look at a potential virus problem. It seemed that when logging on to the computer, a big message showed up claiming the police has blocked the computer. It also showed the computer’s ip and isp (all of which can easily be picked up by any program running on the computer). The message above says Detta operativsystem är blockerad på grund av brott mot svensk lag. Fastställt följade brott:. The message itself looks quite legitimate aside from some spelling problems, so i can see how some might get scared by this.

The nasty part of the message is that after it showed up the computer wouldn’t respond to most commands like Alt+Tab, Alt+F4 etc. Ctrl+Delete worked however, but the task manager could not be started. Only option was to log out again (through Ctrl+Alt+Delete prompt). Other accounts on the same computer however did not show the same signs of infection, so I could do some research (using google) on another account. I tried running a full scan on the computer from another account, but nothing interesting showed up. After a few other dead ends I found a solution that worked, so maybe this can help someone else too.